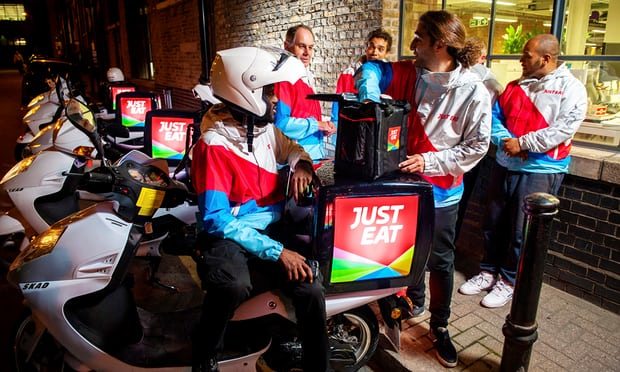 Just Eat, the online takeaway company, was on Wednesday night officially promoted into the FTSE 100 list of Britain’s blue chip companies, with a valuation of £5.5bn – making it worth half a billion pounds more than the UK’s second biggest supermarket chain .

The UK’s love affair with having pizzas, curries and kebabs delivered to their door has spawned a mobile food business with no products and no outlets that is more highly valued than Sainsbury’s, which sells 90,000 products through 1,400 stores – and also owns the Argos chain. Just Eat is also worth more than Morrisons and Marks & Spencer.

It has also turned a little-known Danish technology entrepreneur into a billionaire.

Bo Bendtsen is the single-biggest shareholder in Just Eat with an 18% stake in the business now worth just over £1bn. But Bendtsen, who had just 88 followers on Twitter at the time of writing, did not found the company, which provides takeaways to 19 million people.

The man who came up with the idea was another Dane, Jesper Buch. He hit upon the idea of Just Eat when he was on a diplomatic internship in Norway in 2000 and set the company up with four friends in his basement. He sold his entire Just Eat stake to a private equity firm for £3m in 2008. 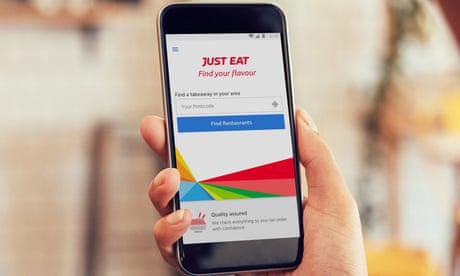 Buch’s website – which highlights his personal mantra that he will do “whatever it fucking takes!” to succeed, spent his windfall on an eight bedroom villa in Marbella complete with a heated outdoor pool, cinema and eight person jacuzzi. The villa is available to rent from £6,700 a week.

Bendtsen, who co-founded web-hosting company UK2 Group, bought into Just Eat in 2005 when Buch was raising funds to expand the company from Denmark to the UK. As well as providing a cash injection, Bendtsen lent his London flat to Buch and his team to use as a makeshift office. Bendtsen’s initial stake in the company is unknown, but he realised £87m when Just Eat floated in 2014 and still retained 23% of the shares.

Bendtsen now holds 122m of Just Eat’s shares through the Sara Marron discretionary settlement trust, which is the firm’s biggest shareholder. A spokesman for the company confirmed that the trust is “associated with Bo Bendtsen, a Danish entrepreneur who was not a founder but one of the growth investors in Just Eat back in 2005”.

Buch, now 44, came up with the idea for Just Eat when he couldn’t find a phone number online to order pizza when he was hungry in Olso. Realising there was a “massive gap in the market” he created his own website which would list all nearby restaurants. He had hit on “the perfect business model”, he told Money Week. “I did not need to handle any product – I could just charge a commission for every transaction.”

Those commissions (13% for existing restaurants and 14% for newcomers, plus a £699 sign-up fee for restaurants joining the service) added up fast. The company now works with 28,000 restaurants in the UK, delivering more than 2m meals a week. It boasts that “nobody offers more variety when it comes to bringing people food”.

After the UK, the business expanded into Australia, Brazil, Canada, France, Ireland, Italy, Mexico, New Zealand, Spain and Switzerland. In the first nine months of this year sales were up 45% to £385m. The company expects to make profit in the region of £160m this year.

It is still raising its profile, becoming the shirt sponsor at Derby County FC for three years and sponsoring the X-Factor in a £10m deal.

More than 800 of Just Eat’s 2,500 staff from across the world (Sainsbury’s, by comparison, has 195,000 staff) came together to celebrate the company’s success last week by creating the world’s biggest human image of a pizza. “It’s not every day you see a marketing assistant from Mexico dressed as a mushroom standing next to a territory manager from Italy dressed as a basil leaf,” said Lisa Hillier, Just Eat’s “chief people officer”.

Just Eat has also launched the British Takeaway Awards. At a black tie ceremony held at London’s Savoy hotel earlier this week comedian Keith Lemon was handing out the awards including a takeaway of the year prize, which was won by Birmingham’s Lime Pickle Indian.

Watching the success of privately held Uber and Deliveroo, City investors have been piling in to Just Eat, sending the shares up from 260p when it floated on the stock market in 2014 to 799p on Wednesday night.

That growth meant that it was admitted to the FTSE 100, alongside packaging company DS Smith and Halma, a technology company that makes smoke detectors. Those demoted from the corporate premier league were Madame Tussauds’ owner Merlin Entertainments, engineer Babcock and medical company ConvaTec.

Speaking about selling his stake in the company, Buch said he “enjoyed creating and building a company, but the reality of managing it did not appeal”.

James Lockyer, an analyst at Peel Hunt, said the fact that Just Eat has overtaken Sainsbury’s is further evidence of “the dramatic shift in the way we are leading our lives”.

“We are spending more and more time at work and we want to spend less time on boring things,” Lockyer said. “We want to be satisfied instantly, it is the same with Netflix – we demand content now.”