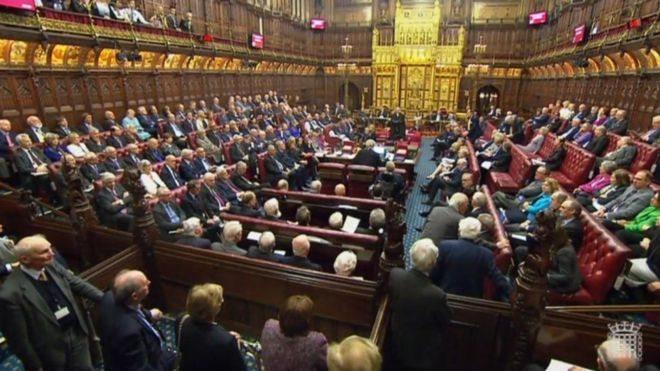 Parliament has passed the Brexit bill, paving the way for the government to trigger Article 50 so the UK can leave the European Union.

Peers backed down over the issues of EU residency rights and a meaningful vote on the final Brexit deal after their objections were overturned by MPs.

The bill is expected to receive Royal Assent and become law on Tuesday.

This means Theresa May is free to push the button on withdrawal talks – now expected in the last week of March.
Brexit: All you need to know
UK ‘won’t have to agree’ early Brexit fee
What is Article 50? What happens next?

The result came as Scotland’s First Minister Nicola Sturgeon announced that she intended to hold a second referendum on Scottish independence at a time when Brexit negotiations are expected to be reaching a conclusion.

Ms Sturgeon said she wanted a vote to be held between autumn 2018 and spring 2019.

The prime minister could theoretically invoke Article 50, which formally starts the Brexit process, as early as Tuesday.

However, Downing Street sources have said this will not happen this week and the PM is expected to wait until the end of the month to officially notify the EU of the UK’s intention to leave, thus beginning what is expected to be a two-year process.

“Parliament has today backed the government in its determination to get on with the job of leaving the EU,” Brexit Secretary David Davis said. “We are now on the threshold of the most important negotiation for our country in a generation.”

The EU Withdrawal Bill was passed unamended after peers voted by 274 votes to 118 not to challenge the Commons again over the issue of whether Parliament should have a veto on the terms of exit.

The House of Lords had already agreed not to reinsert guarantees over the status of EU residents in the UK back into the bill after they were rejected by MPs, with the government winning the vote by a margin of 274 votes to 135.

Later analysis of the division list for the first Lords vote on EU citizens’ rights to remain in the UK showed that 25 Labour peers sided with the Lib Dems, including former cabinet minister Lord Mandelson.

Earlier, the government had comfortably won votes on the issues in the Commons, with only a handful of Tory MPs rebelling.

The votes came after Brexit minister Lord Bridges of Headley warned that now was not the time to “return to the fray” by inserting “terms and conditions” in the legislation.

Labour’s spokeswoman Baroness Hayter of Kentish Town attacked the Lib Dems for not being responsible and “falsely raising” people’s hopes on the rights of EU citizens living in the UK.

Liberal Democrat Lord Oates said the government had failed to make concessions over the position of EU nationals living in the UK and called on peers to insist on changes.

Brexit campaigners welcomed the “clear mandate” given to the UK government ahead of the start of official negotiations.

“Now, it’s time to go into these negotiations with some ambition and support the government, so it can secure the very best deal – one that is good for the whole UK, and good for the EU too,” said Tory MP and former minister Dominic Raab.

Labour leader Jeremy Corbyn said the rejection of the Lords amendments was “deeply disappointing” but insisted the opposition would continue to press for the rights of EU nationals to be prioritised and for the maximum parliamentary oversight of the process.

He tweeted: “Labour at every stage will challenge govt plans for a bargain basement Brexit with our alternative that puts jobs & living standards first.”

Flow chart showing how the bill progresses through Parliament